The results of Donna Laframboise’s Citizen Audit crowd-sourcing project were released today. This project, in which I participated, provides an unequivocal NO in answer to the question:

Are Rajendra Pachauri’s, “science” journalists’ and other media mavens’ claims that the Intergovernmental Panel on Climate Change (IPCC) Assessment reports are “all on the basis of peer-reviewed literature” supported by the evidence in the references?

As Laframboise notes in a press release:

21 of 44 chapters in the United Nations’ Nobel-winning climate bible earned an F on a report card released today. Forty citizen auditors from 12 countries examined 18,500 sources cited in the report – finding 5,600 to be not peer-reviewed.
[…]
Based on the grading system used in US schools, 21 chapters in the IPCC report receive an F (they cite peer-reviewed sources less than 60% of the time), 4 chapters get a D, and 6 get a C. There are also 5 Bs and 8 As. 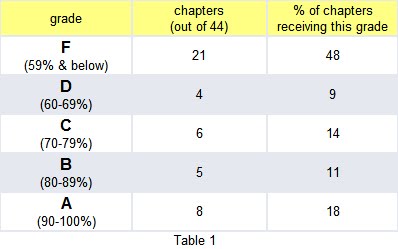 Be sure to check out the full IPCC Report Card, as well as the Detailed Findings – with links to each of the 132 audits.

You can verify for yourself that the IPCC was always credited with the higher number of peer-reviewed references found in any chapter’s three audits by taking a look at the “raw data“. No need for any FO! requests here!

Peter B., an Australian programmer, whose AccessIPCC application is under development (and I’ll have more news about this in a few days or so!), was kind enough to provide us with the preliminary numbers his program found for each chapter (and verse, actually!) of this latest edition of the climate bible.

Considering the lack of consistency in the IPCC’s citation of source material – which presents even more of a challenge to a computer program than to three pairs of eyeballs – I’d say that Peter’s results were remarkably close to ours, as you will see for yourself when you view our raw data – because I’ve included his, for comparison purposes. All declines are in full view!

But speaking of consistency … there is one thing about which IPCC Chair, Pachauri is indisputably consistent. Btw, three guesses as to who might be the Steering Committee Chair of yet another acronymic offspring of the UN’s UNEP/WMO, the AIACC (which happens to be the source of many non-peer-reviewed working papers cited). But I digress …

Pachauri’s consistency in claiming that the IPCC sources are all peer-reviewed probably rates an A. But, as the IPCC Report Card confirms, if he were to be graded on truthfulness, one could say – with a very high level of confidence – that there’s a very high probability that he would earn an F. Then again, it might depend on one’s definition of the word “all”.