Believe it or not, yet another series of “informal climate talks” under the auspices of the United Nations Framework Convention on Climate Change (UNFCCC) has just concluded in Bangkok.

According to the September 5 Press Release issued by the “United Nations Climate Change Secretariat”:

(Bangkok, 5 September 2012) – A week of informal climate talks in Bangkok ended today with concrete progress on key issues across all three negotiating groups, setting a firmer base for decisions that will be made at the UN Climate Change Conference this year, in Doha.

“The investment in Bangkok has paid off. Government negotiators have pushed forward key issues further than many had expected and raised the prospects for a next successful step in Doha,” said Christiana Figueres, Executive Secretary of the United Nations Framework Convention on Climate Change (UNFCCC).

“There are still some tough political decisions ahead, but we now have a positive momentum and a greater sense of convergence that will stimulate higher-level political discussions ahead of Doha and set a faster pace of work once this year’s conference begins,” she said.
[…]

Yet, for some strange reason, David Thorpe, News Editor of the U.K. Energy & Environmental Management blog had a somewhat different impression of the outcome of these talks [h/t GWPF via Twitter]:

The UN climate talks featuring delegates from 190 nations, that have been ongoing for the last week in Bangkok, Thailand, and which conclude today, have produced few concrete results.

The talks were happening against a backdrop of record Arctic ice melt, recent flooding in the Philippines, Asam and other areas, recent drought in the US, and an ongoing food crisis in the Sahel.

However, after one week of talks in Thailand, not a single country has made a fresh commitment, and US negotiators stunned delegates by calling for any new treaty to be ‘flexible’ and ‘dynamic’ rather than legally binding, representing a complete U-turn on its previous position.

At the summit, the UN released a report showing that several rich nations will not even meet their existing pledges to cut greenhouse gas emissions by the end of the decade, made at Copenhagen in 2009.

These nations include Australia, Canada, Japan, Mexico, South Africa, South Korea and the US.

The report, from the UN Environment Program, adds that even if all nations do meet their existing pledges, emissions of greenhouse gases will still reach between 50 and 55bn tonnes of carbon dioxide equivalent, that is 11bn tonnes, or 20%, more than what is needed to try to keep temperature increases below 2°C.

“It’s still possible to meet a 2°C pathway, if there is sufficient political will,” commented Niklas Hoehne, and author of the report on Tuesday. “We’re not facing a participation gap here – it’s an ambition gap.”

Meanwhile, developed countries want the industrialised developing countries such as India, China and Brazil, to take more responsibility for cutting their emissions.

They say that if this was resolved, it would allow the issues of technology, finance, intellectual property lies and emissions from aviation and shipping, which are stymied, to be set aside while the responsibilities of the emerging economies are increased in the short and long-term and the rich countries take stronger action after 2020.

But this is unlikely to happen without further commitments from developed countries. Depressingly, it seems the stalemate continues.

Perhaps Thorpe got his story from a different Press Release?! But his article gives no indication of his source(s).

But back to the word according to the UNFCCC … It may (or may not) be worth noting that this particular press release is prefaced by the following:

For use of the media only

and that in lieu of the customary “For further information contact …” details, one finds (my bold):

With 195 Parties, the United Nations Framework Convention on Climate Change (UNFCCC) has near universal membership and is the parent treaty of the 1997 Kyoto Protocol. The Kyoto Protocol has been ratified by 193 of the UNFCCC Parties. Under the Protocol, 37 States, consisting of highly industrialized countries and countries undergoing the process of transition to a market economy, have legally binding emission limitation and reduction commitments. The ultimate objective of both treaties is to stabilize greenhouse gas concentrations in the atmosphere at a level that will prevent dangerous human interference with the climate system.

Oh, my! Look how au courant with communication technology they’ve become! The only hyperlinked item in the above, btw, goes to another UNFCCC page called “Press News”. There one finds a link to a Final press release (also prefaced by “For use of the media only”). It seems to be all about … finance. Just in case you missed it the first time, this “Final” press release, is actually about the:

Governments, private sector and civil society work towards developing common understanding of how to scale up mobilization of long-term climate finance

Some excerpts from this three-day July Bonn meeting press release (my emphasis):

The three-day event, which ended today, was the first of two transparent, interactive UNFCCC workshops on long-term climate change finance this year. They were requested by governments as part of a work programme on long-term climate finance agreed at the UN Climate Change Conference in Durban at the end of 2011 (COP 17/ CMP 7).

“It is clear that we cannot continue to tackle climate change with old solutions, and that no one single source is going to be appropriate or sufficient to mobilize climate finance at a speed and scale that would allow people in developing countries to build their own climate-resilient futures. This event has allowed all stakeholders to think outside the box, to explore options in highly creative ways, and to pave
the way for stronger climate action,” said UNFCCC Executive Secretary Christiana Figueres.
[…]
The event was made accessible to all interested stakeholders with the help of live webcast, social media and an online platform on the UNFCCC website by which stakeholders could send in material and put questions to the two Chairs. More than 1,000 messages, comments and questions relating to the workshop were sent via Twitter using the #LTFchat hashtag or posted on Facebook.

Look at that, folks! This was the first of “two transparent, interactive … workshops”. I wonder when they will hold the second; after all, more than “1,000 messages, comments and questions” is nothing to sneeze at! Btw, I know you will be as disappointed as I was to find that #LTFchat has only four Tweets and that <very deep sigh> “Older Tweet[s] … are unavailable”. 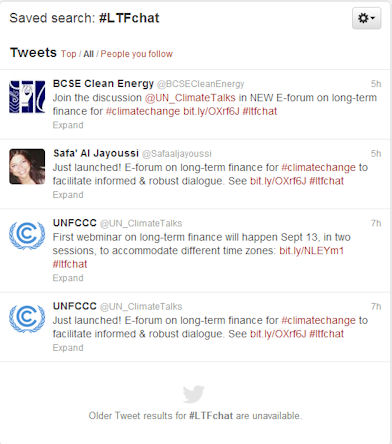 A quick scan of their Facebook page does not do much for the credibility of this “More than 1,000 messages …” either. OTOH, if UNFCCC head honcho, Christiana Figueres (whose 667 Tweets are still visible) can be believed, there were far more than “1,000”: 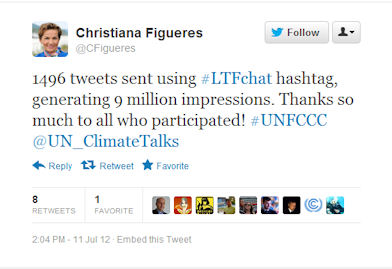 Oh, well … I suppose one must keep in mind that these Press Releases are intended “For use of the media only”. And as we have seen members of the media are not known for conducting due diligence and fact-checking. So I’m sure that such discrepancies – and missing evidence – cannot possibly matter.

Then, again, perhaps one should consider the immortal words of the University of East Anglia’s Prince of Spinners, Neil Wallis – whose June 13, 2012 “witness statement” to the U.K. Leveson Inquiry (launched on the heels of last year’s News of the World phone-hacking scandal which saw Wallis being among those arrested for their involvement) suggests that others should do as he says (but probably not as he does!) In response to the Inquiry’s exploration of:

views on the specific benefits and risks to the public interest arising from relationships between senior politicians, at a national level, and the media. What does the public stand to gain from this relationship? […]

It is essential for the public to receive a more rounded impression of those elected in their name, as distinct from the one politicians would want them to accept. This rounded impression is not derived from the PR machines assembled by the Governments and other political parties. The views promulgated by the omnipresent PR machines are highly partial and contrived. In other words, propaganda. It is through the press and media speaking directly to politicians, civil servants and party officials that the true picture is teased out and emerges. [emphasis added -hro]

On the matter of “Role in Holdinq Politicians and the Powerful to Account”, Wallis had further opined (p. 5):

Holding politicians and the powerful to account is the single most important obligation of a free press. The major obstacle to the process of holding to account is that the politicians and the powerful do not want it to happen. The press even against the background of stringent libel and privacy laws has exposed the infidelities of countless corrupt practices of MPs and members of the House of Lords, and public figures. [emphasis added -hro]

In the past month, Wallis has been quite diligently acting as his own … uh …”highly partial and contrived PR machine” via Twitter and offering up a few self-serving whines via the Huffington Post in the U.K.

He’s not very keen on answering questions pertaining to the “true picture” of his involvement in the emergence of the “Poor Phil” propaganda he and his former colleague(s) had dished up for the University of East Anglia: 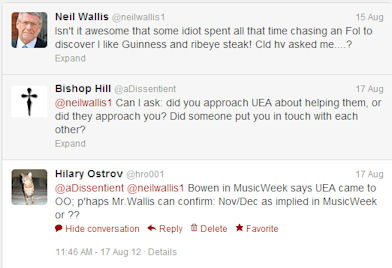 Which output from which “highly partial and contrived PR machine” are we to believe?! The UNFCCC? David Thorpe and Energy & Environmental Management? Figueres’ July account of the (now sadly missing) 1496 Tweets? The jury, of course, is still out on Wallis; however, his own reluctance to be held accountable strongly suggests that his words are to be taken with a very hefty grain of salt.

Ah, well that’s “climate change”, I suppose! So much “ambition” … so many “gaps” … so little credibility … and so many unanswered questions, eh?!

8 thoughts on “Climate change gaps in “ambition” … and in credibility”