In my previous post, I had noted that longtime Intergovernmental Panel on Climate Change (IPCC) Lead Author, Andrew <barrage of intergalactic ballistic missiles> Weaver had become a PR agent for Greenpeace.

However, As Alex Cull had observed in a subsequent comment this is not a new avocation for Weaver:

If you look at the Greenpeace website petropolis-film.com, one of the “webisodes” featured is by Andrew Weaver.The same video is on YouTube and was uploaded on 7th May 2009, described as being part of Greenpeace’s “Stop the Tar Sands” campaign, so it looks like he’s been a de facto spokesman for them for a while now.

As an aside, it’s interesting that just over 2 minutes into the video he repeats the IPCC’s prediction about mass extinctions of species because of global warming […]

I’m not sure what the readership of the Capilano Courier might be, although it appears to be a “student newspaper” that is able to pay its contributors.

Anyway … columnist Max Olesen has now published an interview with Weaver. Some excerpts:

GARDEN CITY OF GOOD AND EVIL [pdf backup here Courtesy of PDFmyURL]
We’re all in this together
By Max Olesen | Published: JANUARY 24, 2013

[…]
In 2013’s field of aspirants to public office, Andrew Weaver is an especially tall poppy. Weaver is the B.C. Green Party’s candidate in the riding of Oak Bay-Gordon Head. He grew up in Victoria, and currently serves as Landsdowne professor and Canada Research chairperson at the University of Victoria. He also won the 2007 Nobel Peace Prize as part of the Intergovernmental Panel on Climate Change, sharing the prize with Al Gore. [emphasis added -hro]

Oh, my … Yet another iteration of the Nobel Peace Prize myth that will not die! Looks as though fact-checking is not part of Olesen’s journalistic ethos. As far as I can tell, Weaver has not bothered to correct Olesen on this matter, but he was triply diligent in alerting his twitter followers to the publication of Olesen’s column: 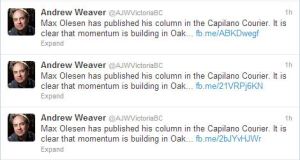 Pretty difficult to miss this tweet from Weaver! 3 different links all leading to same column

So why abandon those lofty heights for the gritty world of provincial politics? This year isn’t the first that Andrew Weaver has waded into politics. In the 2009 B.C. election Weaver endorsed Gordon Campbell and the B.C. Liberals, calling the former premier’s leadership on the environment “visionary and courageous,” and urging “anyone who cares about our planet…to support leaders like Gordon Campbell.”

In 2011, Weaver gave his endorsement to Tom Mulcair at the federal level, appearing with the NDP leader at a Vancouver press conference, and stating, “Canada needs a prime minister who recognizes that a healthy economy does not have to come at the expense of a healthy environment.”

Weaver, unconcerned about vote splitting, also does not shy away from his past endorsements across party lines. “I have a long history of working with political leaders from across the political spectrum both in Canada and abroad,” he says. “I have always supported good policy and good people; I will not oppose policy simply because another party came up with the idea.”

Despite his passion for politics, and his commitment to standing for election, Weaver doesn’t see a seat in the B.C. Legislature as the end of the road for him. Crediting [solitary Federal Green MP] Elizabeth May as “an inspiration” Weaver says, “I’m not doing this to make a career out of politics; rather I’m stepping up to make a difference.” [emphasis added -hro]

Too bad that Olesen didn’t ask Weaver (as I had some months ago):

Then again, perhaps Olesen did ask the same question, and received the same response as I did: Sounds of Silence.

It’s exciting to be part of the upcoming documentary “Running On Climate”2020vancouver.com/story/movie-mo…

Please see my comment below for a response I have posted to BC commentator, Vaughn Palmer’s rather uncritical observations of Weaver’s (and/or the BC Greens’) high hopes.