[Please see Update at the end of this post -hro]

Andrew <barrage of intergalactic ballistic missiles> Weaver is a longtime Lead Author for the Intergovernmental Panel on Climate Change (IPCC) whose “passion for politics” has led him to run for provincial office under the banner of the BC Green Party, of which he is the proud Deputy Leader.

His candidacy is, no doubt, greatly enhanced by the endorsement of Independent MLA Vicki Huntington. She speaks glowingly of his (falsely attributed) “Nobel Prize-winning scientific expertise”.

And fruit-fly expert, and drama queen, David Suzuki, has endorsed his candidacy, as well. This has led the oh-so-conservative and understated Weaver to remark:

I cannot describe in words what it means to me to have him provide a strong endorsement for my campaign.

At about the same time as he announced his candidacy, Weaver began tweeting. So I decided to follow him on twitter. I haven’t paid too much attention to most of his 1,000+ tweets to-date, but every once in a while something catches my interest. He’s such a busy and important man that he hasn’t found time to reply to my questions regarding the potential for conflict of interest that derives from the many hats he’s wearing these days. And he’s never acknowledged the few replies I’ve sent to his tweets.

Yesterday, though, one of his tweets caught my eye:

The “great news” to which he’d linked is an article in the Vancouver Province.

Now it just so happens that a reader had alerted me to an article by Margaret Wente in yesterday’s Globe and Mail:

There’ll be some challenges, of course. Unfortunately, no matter how hard they try, your schools and hospitals can’t possibly eliminate all their greenhouse-gas emissions – they’re too old and drafty, the ambulances and buses still run on fossil fuel, and solar panels are still too darned expensive.

But you can fix that. Just force them to buy carbon offsets. In other words, make them pay for all the greenhouse gasses they emit by forking over millions of dollars to folks who have reduced their greenhouse emissions. Presto! If you can’t achieve carbon neutrality, you can buy it.

That’s what B.C. is doing. Every public institution is now required to pay $25 a tonne for the carbon dioxide it emits. That’s money that’s no longer available for textbooks, teachers and nursing care. Last year, Vancouver’s regional health system coughed up $3-million to buy carbon credits. The University of British Columbia forked over $1.5-million, and B.C.’s public schools paid $4.4-million. But never mind. B.C. is now the greenest government on Earth.

Does all this strike you as a bit loony? Wait – there’s more. Most of this money winds up in the pockets of large private companies, which are paid for not emitting greenhouse gasses they almost certainly wouldn’t have emitted anyway, according to investigations by The Vancouver Sun.

I had actually written about this legislated lunacy (and Weaver’s role in its formulation) almost two years ago when it first came into force. It is part and parcel of the bundle that included BC’s carbon tax. But I digress …

I decided to reply to Weaver’s “great news” by suggesting in a tweet:

Better news would be if BC backed off the legislated lunacy found in B.C.’s looniest green scheme yet

which I had linked to Wente’s article. And I did a subsequent tweet:

But when I decided to see what was new in the twitter-verse a few hours ago, I saw something I had never seen before:

Andrew Weaver “protects” himself from political heat in his kitchen!

What a way to win friends and influence people, eh?! Protect your twitter account, so that in effect, you stop your tweets from appearing in – and/or being “retweeted” by – people whose tweets are not exactly ringing endorsements of your green-heart-on-sleeve hypocrisy and mediocrity!

Come to think of it, this “protection” might be a “trick” he picked up from his buddy, Michael Mann, who had graced Victoria with his presence earlier this month.

At the beginning of last month, BC political commentator, Vaughn Palmer had written a short piece [h/t Andrew Weaver … when he was still permitting me to follow him on twitter!] on

Oak Bay-Gordon Head. The Greens, in an inspired move, are fielding Andrew Weaver, the internationally respected University of Victoria academic and climatologist in the seat now held by cabinet minister Ida Chong. But fed-up Liberals could get behind Weaver as a keep-them-honest check on an anticipated NDP government, giving the Greens their first presence in the provincial legislature.

Here’s my reply to Palmer:

Vaughan Palmer wrote, “But fed-up Liberals could get behind Weaver as a keep-them-honest check”
Surely one should expect that a candidate one hopes will keep others “honest” will have demonstrated honesty in his/her own interactions. That being the case, I have to ask:

Where’s the “honesty” in suggesting that “climate change” will be shown to be a “barrage of intergalactic ballistic missiles”?

Where’s the “honesty” in one who permits a student newspaper reporter to claim, “[Weaver] also won the 2007 Nobel Peace Prize as part of the Intergovernmental Panel on Climate Change [IPCC], sharing the prize with Al Gore” when he and his booking agency now know full well that he has no right to rest on such laurels?

Where’s the “honesty” in one who chooses to elevate his computer-generated simulations to the status of scientific “experiments”?

Where’s the “honesty” in one who fails to respond to a question regarding the conflict of interest that derives from his Green Party affiliations and the “objectivity” required of an IPCC Lead Author?

Where’s the “honesty” in one who fails to acknowledge the further conflict of interest that derives from this same individual choosing to act, in effect, as a PR agent for Greenpeace?

Perhaps, as Palmer noted, it was an “inspired” move on the part of the BC Greens. But the view from here is that, while Weaver may be an “internationally respected … academic and climatologist”, those who hold him in such high esteem may have neglected to perform any due diligence prior to formulating such an opinion.

Voters of Oak Bay Gordon Head, do take note. If Andrew Weaver becomes your MLA and you happen to disagree with him – or ask him some inconvenient questions – he just might slam the door in your face.

Helpful hint from Hilary to Andrew Weaver: If you can’t stand the heat, I suggest you stay out of the political kitchen;-)

UPDATE 03/13/2013 10:01 PM PDT: My apologies, folks! Weaver did actually respond to one of my tweets (in fact he even made it a “favourite“); so I thought I’d capture it before he decides to “protect”/disappear the evidence: 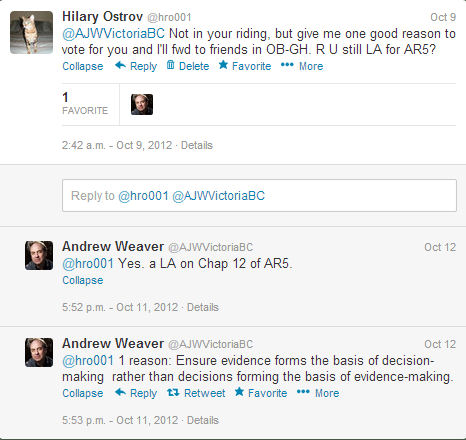 Once upon a time, Weaver was responsive to questions!

But that was back in October, long before I became a person undeserving of receiving Weaver’s hot-off-the vine tweets.