Stewart Elgie is an environmental activist, as I have noted in the past (here, here and here), who runs a “think-tank” he calls “Sustainable Prosperity” (SP) which operates out of an office in Ottawa (for the renovation of which the University of Ottawa very generously donated $340,000 worth of “in kind contributions” along with $170,000 “in kind contributions” for … well, for who knows what!)

Elgie has dipped his fingers into many environmental pies – and has proven himself to be somewhat of a self-promoter with few, if any, qualms about being highly economical with the truth. IOW, transparency and full disclosure are not exactly high on his list of priorities. For example, SP purports to be a “charitable … initiative”; but – not unlike many “initiatives” which are beneficiaries of Tides Canada – SP is not a registered Canadian charity.

Around April 1, I became aware of the shameful campaign to discredit the BC Auditor General (AG)’s report on the BC government’s so-called “carbon neutrality”. Consequently, I was somewhat, well, skeptical when I read the following from the Canadian Press in the March 26 edition of the Vancouver Province tabloid:

VICTORIA — A set of leaked letters is undermining the credibility of a report to be released today by Auditor General John Doyle over B.C.’s carbon neutral experiment.

Environmental, legal and industry experts have roundly criticized Doyle’s upcoming report as “useless,” and an attempt to “wilfully misinterpret and misconstrue” the facts about the environmental tax plan

The March 23 letter to MacDonald is from University of Ottawa law Prof. Stewart Elgie, an environmental law expert.

Elgie’s letter states he stepped down as an expert adviser for Doyle’s carbon neutral audit and has terminated his position.

“It would not be appropriate to share the details of why I have taken this step,” states Elgie’s letter. “I will simply say that I have not been shown or reviewed any of the (auditor’s) draft reports for the past seven months.”

“Before that time, the materials I did review indicated that the audit findings were heading in a direction that was inconsistent with the expert advice I provided in several major areas, particularly concerning the Darkwoods project,” states the letter.

At this point, I had already read the AG’s damning (but relatively diplomatic) report, An Audit of Carbon Neutral Government, in which he had noted:

This audit examined two projects [of Pacific Carbon Trust (PCT)] which accounted for nearly 70 percent of the offsets purchased by government to achieve their claim of carbon neutrality: the Darkwoods Forest Carbon project in southeastern B.C. and the Encana Underbalanced Drilling project near Fort Nelson. However, this claim of carbon neutrality is not accurate, as neither project provided credible offsets.

The credibility of carbon offsets is the crux of the entire concept. [emphasis added – hro]

I was somewhat curious as to why “advisor” Elgie might have sent this letter of “resignation” to anyone at PCT. Was Elgie PCT’s designated “hit man” or was he a member of their board?! Or was this simply a case of sloppy – or deliberately foggy – writing on the part of whoever might have written and/or edited this CP piece? But then again, perhaps it was Elgie who was smothering his actions with a coat of deliberately misleading smog.

So I sat right down and wrote the AG a letter, in which I had cited the Province article. I didn’t expect that the AG would be able to confirm (or explain) Elgie’s letter to PCT, so I didn’t ask him about this; but I did ask if he could:

confirm whether or not Elgie’s depiction of his ‘role’ in your audit is an accurate reflection of reality.

A few hours ago, I received a reply from the Assistant Auditor General. The following is a screen-cap of the pdf I received, to which I have applied “white out” to my E-mail address and their office phone number and fax: 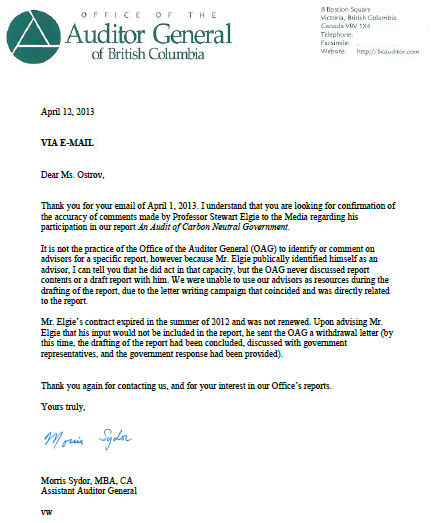 Lest Mr. Sydor’s message (which I share with his knowledge and permission … no FOI request was required;-)) get lost in webification of this image, here are the salient parts of his response (with my emphases added):

I understand that you are looking for confirmation of the accuracy of comments made by Professor Stewart Elgie to the Media regarding his participation in our report An Audit of Carbon Neutral Government.

It is not the practice of the Office of the Auditor General (OAG) to identify or comment on advisors for a specific report, however because Mr. Elgie publically identified himself as an advisor, I can tell you that he did act in that capacity, but the OAG never discussed report contents or a draft report with him. We were unable to use our advisors as resources during the drafting of the report, due to the letter writing campaign that coincided and was directly related to the report.

Mr. Elgie’s contract expired in the summer of 2012 and was not renewed. Upon advising Mr. Elgie that his input would not be included in the report, he sent the OAG a withdrawal letter (by this time, the drafting of the report had been concluded, discussed with government representatives, and the government response had been provided).

While Sydor’s “Upon advising … [Elgie] sent” is somewhat less than clear or grammatically correct (I would have written, “After we advised Mr. Elgie … he sent …), the bottom line, so to speak, is that Elgie’s claim may result in furthering his “prosperity” but as a “fact” one could take to the bank, it is far from even approaching supportable – or “sustainable”.

Reading between Sydor’s diplomatic lines, it seems to me that if Elgie had “been shown or reviewed” any “draft reports” they must have been shared with him by PCT. As the AG had noted in the conclusion of his scathing introductory comments:

Of all the reports I have issued, never has one been targeted in such an overt manner by vested interests, nor has an audited organization ever broken my confidence, as did the senior managers at PCT by disclosing confidential information to carbon market developers and brokers. The orchestrated letter-writing campaign from domestic and foreign entities which followed this disclosure demanded considerable staff time, and resulted in the delay of this report. I cannot sufficiently express my surprise and disappointment that a public sector entity, with a fiduciary duty to the people of British Columbia, chose to expend its time and energy in this manner, rather than addressing the concerns raised in the audit – and that they did so with the knowledge of their governing board.

Clearly Elgie did not “resign” (unless it was from the PCT board); he was – in effect – fired for cause! And deservedly so, IMHO. And if he cannot be trusted to be honest about this, why on Gaia’s green earth should we trust any of SP’s “reports” – least of all SP’s June 2012 report on the “success” of BC’s carbon tax.