So the British Columbia provincial election is over. Premier Christy Clark and the BC Liberals (contra all the pundits’ and pollsters’ great expectations) came through with flying colours that landed them – and their platform – a majority government, with more seats in the provincial legislature than they had before the election was called!

No doubt trying to make the best of a bad situation unfolding, CBC’s green-heart-on-sleeve coverage on May 14 was, well, appalling!

They continued to honk for Weaver‘s unearned laurels at least twice during the early part of the evening. Whether my unacknowledged tweet:

@cbcnewsbc You need to change your Weaver script! Nobel Prize not for science & awarded to IPCC (Panel of nations) http://wp.me/pJtnm-1c6

caused them to drop this over-hyped example of deliberately misleading Weaver-spin, I have no way of knowing. But I do know that in their post-election coverage of their favourite “star”, the CBC was right back at it:

Greens not to blame for NDP loss, says leader Sterk 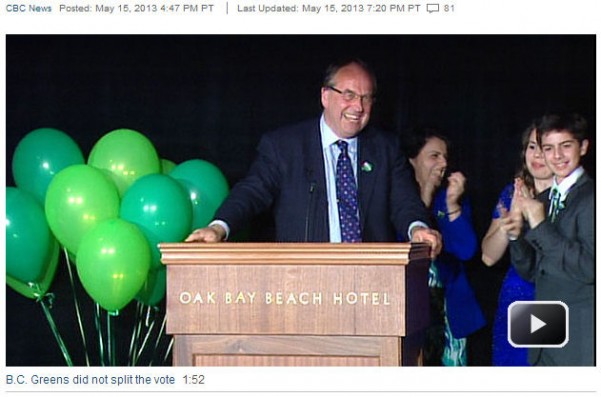 In the aftermath of the NDP failure to win the B.C. elections, some pundits are blaming the Green party for splitting the vote on the left, but not everyone agrees with the analysis.

“We didn’t split the vote. We are the vote in Oak Bay-Gordon Head,” said Weaver on Tuesday, after winning his seat. [emphasis added -hro]

“We are the vote …”?! That’s almost as inane and meaningless as another Weaverism™ that appeared in the National Post on the eve of the election:

The reality is (to use one of Weaver’s repeated appeals to his own authority – and repeatedly unchallenged – prefaces in an “interview” with CBC’s Evan Solomon on Solomon’s “Power and Politics” show, complete with yet another viewing of Weaver’s unearned Nobel laurel), as even the Weaver-cheerleading Victoria Times-Colonist acknowledged yesterday:

* Eligible voters in Oak Bay-Gordon Head for this election was 37,443. Total votes cast in all 134 polls in this riding was (courtesy of National Post):

Your math may vary (as, evidently does that of Andrew “I’m a climate scientist and we are the vote” Weaver) but by my count, of the eligible 37,433 voters in Oak Bay-Gordon Head a mere 9,602 (< 26%) actually voted for Weaver! I know we have a first past the post system of voting which does have some inherent problems, but that’s the way it is.

Did the CBC tell its readers/listeners/viewers about Weaver’s [free speech for me but not for thee] libel suit against the National Post (and the “novel” remedy he’s seeking)? Not bloomin’ likely!

Did the CBC tell its readers/listeners/viewers about Weaver’s practice of slamming the virtual door in the face of those who dare to ask … uh … inconvenient questions? Not bloomin’ likely!

Did the CBC learn any lessons about its dutiful recitation of Weaver-spin vis a vis the 2007 Nobel Peace Prize awarded to the Intergovernmental Panel on Climate Change and Al Gore? Not bloomin’ likely!

As the right-side visual “effects” in Solomon’s “Big Green win” story at one point predictably and dutifully visually reiterated:

Did the CBC choose to repeat the Weaver-spin unearned laurel on which he continues to choose to rest? You betcha! The CBC piece at the top of this post dutifully reported:

In light of all the above, I invite my readers to gimme’ one good reason why I – or anyone – should trust the word of Andrew “we are the vote” Weaver, or of the cheer-leading green-heart-on-sleeve CBC. Perhaps one might be forgiven for the rather distinct impression that – with a throw of the election dice – the voters of Oak Bay-Gordon Head have landed on one of the squares of Monopoly … the climate change game.

4 thoughts on “CBC and Camp Weaverland vs reality”