As I have noted in the past, Rajendra K. Pachauri, Chair of the Intergovernmental Panel on Climate Change (IPCC) is a man of many hats, who is not known for consistency – except when he’s in “non-policy prescriptive” advocacy mode.

When he wears his “world’s leading climate scientist” hat, Pachauri has certainly been known to shoot from the lip, as he did, for example, during a “side-event” at Rio+20 last year:

“I would submit that the time has come that we shouldn’t really wait for governments,” he said.
[…]
“Climate change is in a sense the 10-tonne gorilla which is in the room and you’re not going to get rid of him easily.” [emphasis added -hro]

The was part of his address at the launch of yet another Statement from yet another advocacy organization of which you may (or may not) have previously heard: The Climate Change Task Force which claims to be:

But speaking of Nobel Peace Laureates … Not unlike the IPCC, of which he is the face and voice, Pachauri is rarely loath to ignore this monopoly‘s own rules. In December 2012, the IPCC issued a “Statement about the 2007 Nobel Peace Prize”, which included the following:

The IPCC was awarded the Nobel Peace Prize in 2007 for its work on climate change, together with former US Vice-President Al Gore.
[…]
The prize was awarded to the IPCC as an organization, and not to any individual associated with the IPCC. Thus it is incorrect to refer to any IPCC official, or scientist who worked on IPCC reports, as a Nobel laureate or Nobel Prize winner. It would be correct to describe a scientist who was involved with AR4 or earlier IPCC reports in this way: “X contributed to the reports of the IPCC, which was awarded the Nobel Peace Prize in 2007.” [emphasis added -hro]

Notwithstanding the above, while Pachauri appears to have doffed his “world’s leading climate scientist” hat in favour of a considerably more modest “noted environmentalist” hat, he (or someone who should know better!) is still promoting an image of himself (as you will see below) as a “Nobel Peace Laureate, 2007”.

But The Times of India (TTOI) must have read the IPCC’s memo on this [h/t DennisA]:

HYDERABAD: This summer’s Uttarakhand tragedy, in which thousands of people lost their lives, was not induced by human activity and such events are likely to reoccur in the future with a bulk of them within short spells of time, said noted environmentalist R K Pachauri, chairperson of the Intergovernmental Panel on Climate Change, which was awarded the Nobel Peace Prize in 2007.

Citing examples such as declining population of coral reefs across the world and rapidly dwindling population of sparrows and vultures in India as well as that of bats in north eastern parts of the USA are evidence of climatic changes that are being observed world over.

“Climatic change is a subset of a larger problem. The bigger issue really is that the society is having an unsustainable growth. There are moral and ethical concerns of climatic change which cannot be ignored even though certain sections of the society show inertia and resistance and don’t want to accept the situation,” he added. [emphasis added -hro]

This “10-tonne gorilla which is in the room” (or at least it was a year ago!) is only a “subset”?! OMG, it must be worse than we thought!

Addressing an audience of 1,300 students from various countries at the Harvard Model United Nations (HMUN) meet in the city, Pachauri said past generations left the present generation with a gamut of problems to grapple with.

Pachauri said that though the [IPCC] is currently not under the umbrella of the UN, it might play a more catalytic role in the future to deal with climate change.

“We are at the threshold of major changes in society. Preservation of biodiversity is not a luxury but a necessity. The generation of today must develop sustainable environment while respecting nature and ensuring wellbeing of all,” said Pachauri. [emphasis added -hro]

Well, I suppose facts have rarely (if ever) been Pachauri’s strong-point. So regardless of the “catalytic role” he now envisions (for an organization of which his days as leader are numbered – to the relief of many, one suspects), his apparent ignorance of the IPCC’s “parentage” – i.e. it is indisputably a “child” of the United Nations Environment Program (UNEP) – is not particularly surprising. Nor is this the first time he has uttered such a claim:

Dr Pachauri: Well, those are UN organisations and they are bound by UN rules, and you know that the IPCC is not a UN organisation, it is an intergovernmental organisation and in that sense we are distinctly different from UNEP and WMO or any of those organisations.

Since he is so “convinced” that the IPCC is not a UN organization, I wonder if Pachauri gave even a moment’s thought as to why he might have been invited to be a speaker who was given top billing by the HMUN organizers as “Nobel Peace Laureate, 2007 and United Nations IPCC Chief” (albeit in very small print!)

I haven’t seen the actual text of Pachauri’s, no doubt, “historic” address to these potential UN-ocrats of the future; perhaps it was in keeping with his “spiritual” mode, as the text of HMUN’s advance billing quote, attributed to Pachauri, suggests:

When we started studying Gandhi’s sayings, his utterances on the environment, we found they were so profound. We have a book we’ve brought out on Gandhi called Mahatma Gandhi: An Apostle of Applied Human Ecology. And he seems to have the most apt answer for every environmental problem that we have. It’s very inspiring. This is an aspect of Gandhi that was not known earlier. He was a great environmental thinker and philosopher. He was very ahead of his time.

Look at that, folks! “Everyone has the right to question science”. Furthermore, this appears not to have been a mere slip of the tongue (nor was the faux Nobel Laureate claim) – as can be seen from this almost larger than life linked ooops … sorry, “poster”: 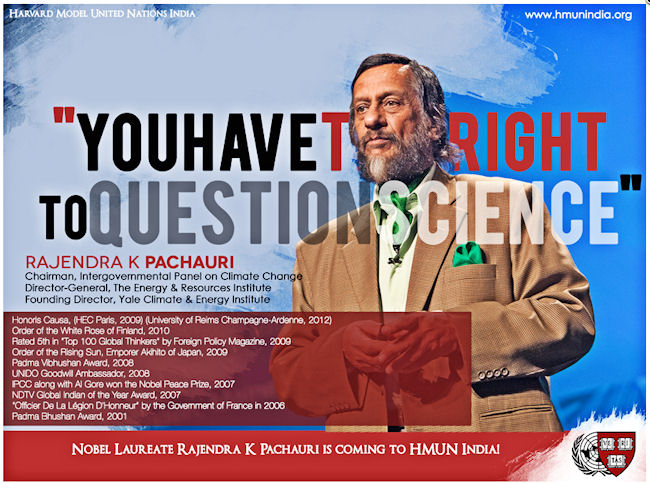 UPDATE: 08/19/2013 Oh, drat! Looks like our “right to question science” may have some “restrictions”. During a junket to Finland recently, Pachauri evidently (breaking yet another of the IPCC’s “rules”) provided his audience with a “sneak preview” of the findings of AR5 … in his typically “non-policy prescriptive” way, of course:

The United Nations’ panel on climate change, the IPCC, is now drawing up a new report on global warming. The head of the panel provided a sneak preview of its findings on Monday in Joensuu.
[…]
Now the IPCC is drawing up its Fifth Assessment Report, which will again be co-edited by the IPCC’s chair, Dr. Rajendra K. Pachauri of India. On Monday, he provided a sneak preview of its findings at a “Changing Climate” seminar in Joensuu, eastern Finland, also featuring Heidi Hautala, the Finnish Minister of international Development.

According to Pachauri, the most important way of limiting the harmful effects of climate change is making polluters pay for their carbon dioxide emissions.

Well, that’s about par for the Pachauri course, I suppose. But here’s the kicker, folks:

The IPCC will reveal the first part of its Fifth Assessment Report in Stockholm in late September. Its director is bracing for a range of criticism of the report — or perhaps even looking forward to it.

“We love debate, after all science only drives (sic) under debate. We welcome it, as long as it’s objective and well-intentioned,” says Pachauri.

So, let’s be careful out there, folks … and make sure all our questions are “objective and well-intentioned”, eh!

4 thoughts on “It’s official: We have the right to question science!”