An update from the “now you see it, now you don’t” department at Frontiers in Psychology, the (now former) home of Lewandowsky and pals’ example of abysmal “scholarship”, their so-called Recursive Fury paper.

In Footnote1 to my March 24 post I had written:

Even though Frontiers has issued a rather milquetoast flavoured “retraction” of Fury, the “abstract” page still reads:

“This article, first published by Frontiers on 18 March 2013, has been the subject of complaints. Given the nature of some of these complaints, Frontiers has provisionally removed the link to the article while these issues are investigated, which is being done as swiftly as possible and which Frontiers management considers the most responsible course of action. The article has not been retracted or withdrawn. Further information will be provided as soon as possible. Thank you for your patience.” [emphasis added -hro]

For the record, readers will be pleased to know that sometime on March 27 (six days after the retraction announcement) someone at Frontiers decided that it would be a good idea to make yet another change. In this instance, they have decided to redirect the link to the abstract

so that anyone who follows it will land on:

Where the page now reads:

This article has been retracted. Please follow the link to the full retraction notice for details

The above text is hyperlinked to:

Hmmm … Elaine McKewon? Now there’s a familiar name. Here’s a totally unexpected (not) tweet (from no doubt unconflicted and objective reviewer of this now retracted [sort of] paper) McKewon had made on Mar. 22/14 [h/t Shub Niggurath’s twitter feed on his blog]: 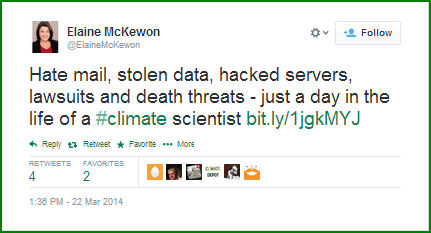 No bias from this reviewer of Lewandowsky’s Fury abomination, eh?!

For the record, the link in the above screen capture of McKewon’s tweet goes to the page of yet another cog in the wheel of the Lewandowsky-Mann meme machine. It’s a March 21 post, entitled “Stephen Lewandowsky: Confronting the Anti-Science Thought Police” which contains Lew’s 42 minute peroration [see Footnote 3 in my earlier post on this saga].

One thought on “A brief update to a Frontears footnote”