UPDATE July 31, 2015: Please note some further developments on the “As the Pachauri world turns” front via my comment below -hro

If you’ve ever watched now former (perhaps or perhaps not!) TERI head honcho and Intergovernmental Panel on Climate Change (IPCC) Chair, Rajendra Pachauri in unscripted mode, you just know that his more articulate renderings have been written for him (or co-written).

When he’s in “unscripted mode” you can virtually count on Pachauri rambling beyond the realm of reason. In this particular mode, he always reminds me of the third-rate “revisionist scholars” I so often encountered during the days when I was actively involved in combatting Holocaust denial on the ‘net. Not unlike such “scholars”, Pachauri has demonstrated a facility for picking up stuff from one table and dropping it on another.

As I had noted in my previous post, on July 15, someone – with the appropriate permissions – had uploaded to the IPCC’s YouTube channel what we now know as the bewigged Pachauri delivering a scripted video as “Chairman of the IPCC”. 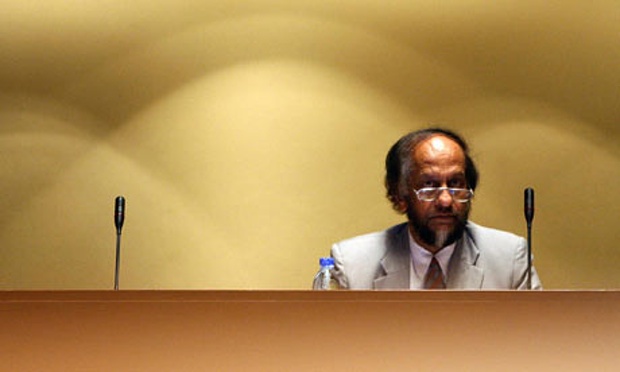 Pachauri in his pre-bewigged days, circa 2010 [Chairman of the Intergovernmental Panel on Climate Change (IPCC), Rajendra Pachauri prepares for a press conference at the United Nations building in Bangkok. Photograph: Saeed Khan/AFP/Getty Images]

One could certainly understand the presence of such a video had it been uploaded by the IPCC sometime prior to mid-February of this year when the allegations of sexual harassment first came to light, and were followed in rather short order by his quiet resignation from the IPCC and a few other related United Nations Environment Program (UNEP) fingers, arms etc.

In fact this resignation was so quiet that North American MSM news outlets – including Canada’s CBC, which is usually so hot to trot on the heels of such allegations – didn’t even deem it worth mentioning. And as far as I have been able to determine, CBC still hasn’t found it to be worth mentioning – notwithstanding the fact that barely an hour goes by when the purported perils of “climate change” aka “global warming” are not mentioned on the CBC’s airwaves. An issue about which (at least according to Pachauri’s declarations some years ago) the world would know nothing, if it weren’t for the work of the IPCC.

But back to (or, perhaps more to the point, fast forward to) mid-July of this year. July 17 was the day that a Delhi court decreed (for reasons that I certainly have not yet been able to fathom) that Pachauri should be permitted limited access to certain TERI offices. And this was also the day that Pachauri’s personal PR people – who’ve been quite remarkable in their various and sundry accounts of the “source” of the allegations against Pachauri, including most recently (i.e. circa July 24 on the heels of the supposed appointment of a Pachauri successor) that the:

complaint against him might be backed by “climate sceptics”

Oh, drat … I jumped forward – again! OK, back to July 17, a mere two days after the mysterious upload of the Pachauri as IPCC Chair video, his personal PR people put forth the following (my bold -hro):

Will work to ensure sensitivity to gender: RK Pachauri

New Delhi: Expressing “delight” over a court order allowing him to enter his office, TERI Director General RK Pachauri, accused of sexual harassment, on Friday said he will work towards ensuring a safe workplace for women.

He said that TERI has been his life’s work and he remains deeply committed to its mission.

However, activists who had earlier raised questions as to why he had not been suspended by the institution expressed shock over the order and termed him as a “threat” who will try to destroy evidence.

“I am delighted to rejoin my colleagues at TERI and to resume my duties. TERI has been my life’s work and I remain deeply committed to its mission and its people. Together we can make even greater contributions to human society through sustainable development based on justice and equity.

“I particularly look forward to further strengthening a culture at TERI that encourages excellence, recognises and rewards merit and ensures a safe and secure workplace that is sensitive to human values and dignity, particularly in respect to gender and social class,” Pachauri said in a statement.

[… And for good measure, someone decided to conclude the article by recycling Pachauri’s favourite myth:]

So we know that Pachauri’s personal PR people have been doing the job for which he’s (presumably) paying them. And as we know, PR people certainly have a knack for spinning! So, cast your mind back, dear reader to Pachauri’s first – and highly improbable, unless he’s totally incompetent and/or ignorant on the basic computer security front – excuse. This was something along the lines of multiple people having access to his laptop and password.

But, in fairly short order, his lawyers seemed to recognize that this implausible excuse was not likely to wash. So they told the court that this was not, in fact, the case! There’ve been so many twists and turns since February, that I cannot recall what the next excuse actually was.

However, considering that “leaks” from the IPCC have been fairly common in the last few years, basic computer security is not their most important product. This being the case … Who would find it in the least bit surprising to learn that those who have permission to upload videos to the IPCC’s YouTube channel share the same login and password?! And that it wasn’t changed after Pachauri’s resignation.

And, if this sharing is in fact the case, it would go quite some way towards explaining Pachauri’s invention of his first (but now discarded) excuse for the allegations. Not to mention a medium to high level of probability (by IPCC standards!) that Pachauri used the still-shared login and password to upload the video, in anticipation of the court’s decision in his favour on July 19.

Pure speculation on my part, I agree. But considering Pachauri’s known history and performances past, IMHO it’s certainly far more plausible than his latest and greatest claim – on the heels of his purported resignation from TERI – to the effect that the charges against him might be backed by “climate skeptics”.

15 thoughts on “IPCC and Pachauri: to see or not to see, that is the question”