It struck me that rather conspicuous by their absence [at a meeting of the Intergovernmental Panel on Climate Change (IPCC)] was any mention (nor any video greetings, as far as I could tell) of UNEP head honcho, Achim Steiner (deliverer of word-salads par excellence, here there and everywhere) or his “boss”, UN Secretary-General, Ban Ki-moon […]

[…] Absent from the gallery of smiling pics of the IPCC’s newly elected honchos is any photo of Working Group III’s Co-Chair, “P.R. Shukla (India)”

During the course of attempting to find some enlightenment on the background of the newly elected, but apparently absent luminary, Prof. Shukla, I regret to report that the pickings were very slim, indeed. But I did encounter a three-minute video, “P.R. SHUKLA – Global Emissions. The 2050 Scenario” from 2010:

This (not particularly frequently viewed) video’s notes are as follows:

We need need a different perception of the problem, but the 2 degree target could be reached. We are a developing country; we are on the transition to a more modern and to an economy where emissions would be significantly lower. Prof. P.R. Shukla (Indian Institute of Management) at the International Workshop Reconciling Domestic Energy Needs and Global Climate Policy: Challenges and Opportunities for China and India in Venice.

As for Shukla’s apparent home-base, the Indian Institute of Management … well, this did not strike me as approaching a top notch source for expertise in “climate change” – or “sustainable development”, for that matter! Although it may well be a “leading business school“.

Oh, well … so much for Shukla. Unless, of course, the IPCC is prepared to offer more detailed backgrounds on its new, improved crop of high profile volunteer personnel. Considering the IPCC’s past performances on this particular “transparency” front, I certainly won’t hold my breath on that one!

Mind you, I must say that it was quite a surprise to note the following while perusing Nature magazine’s latest contribution to the “climate communication deficit” songbook:

The IPCC has had its controversies, including a glitch in its 2007 projection for Himalayan glacier melt and this year’s resignation of former chairman Rajendra Pachauri, who faces — and denies — accusations of sexual harassment.

How unfortunate that no one seems to have communicated Pachauri’s perambulations to the powers that be at yet another of the ever-increasing – and/or surfacing – pantheon of alphabet soups in the foggy worlds of “climate science” and “sustainable development”.

You see, one of the alphabet soups I had stumbled across a few days ago, during the course of shaking Shukla trees – in this instance, IGES – was a Japan-based group known as the “Institute for Global Environmental Strategies (IGES)” which was:

[E]stablished in March 1998 under an initiative of the Japanese government and with the support of Kanagawa Prefecture based on the “Charter for the Establishment of the Institute for Global Environmental Strategies”. The aim of the Institute is to achieve a new paradigm for civilization and conduct innovative policy development and strategic research for environmental measures, reflecting the results of research into political decisions for realising sustainable development both in the Asia-Pacific region and globally. IGES made the transition to a Public Interest Incorporated Foundation in April 2012.

Any familiar bells and dog-whistles in the above?! You betcha! But wait … there’s more!

While exploring this particular IGES, much to our surprise, my mouse and I stumbled across a May 2015 pdf [backup here] entitled “List of the Board members, Auditors, Honorary Advisors and Counselors”. The “surprises” we found were on p. 2, i.e. on the list of “Honorary Advisors”: 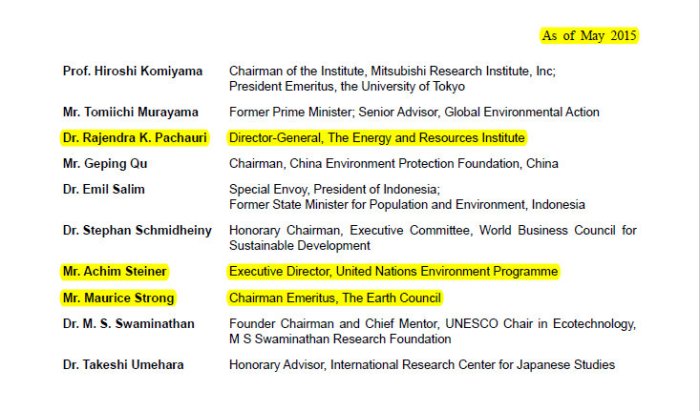 Fancy that! Steiner, Strong and Pachauri … recycled as Honorary “tiny fish for Japan”?! If you haven’t heard of Maurice Strong and his “connections” … be sure to take a look at Peter Bobroff’s extensive findings.

Who knows, perhaps this might explain Steiner’s notable absence at the recent gathering of the IPCC’s newly elected honchos of the great and the good kind?!

And speaking of “tiny fish for Japan” … while I was putting this post together, I took a stroll down my musical memory lane. Back in the days – long ago and faraway – when one could actually hear the lyrics in a song. So, I thought I’d share the (still missed and tragically departed as a consequence of a 1989 plane disaster) music of a great Canadian voice, Stan Rogers. Enjoy!

9 thoughts on “Rajendra Pachauri: a recycled tiny fish for Japan?”