Back in March of this year, the United Nations Development Program (UNDP) announced an “innovative initiative” in which participants from around the world are invited to vote on what the priorities should be in a post-2015 world.

When I first stumbled across the “For information media • not an official record” of a March 13 Press Conference (and standard photo-op and exhortation from Ban Ki-Moon), I was concerned that this might have been another opportunity missed. Here are some excerpts from the Press Conference (note the use of past tense … all emphases mine -hro):

PRESS CONFERENCE ON ‘MY WORLD’ INITIATIVE FOR POST-2015 DEVELOPMENT AGENDA

People from around the world had an opportunity to join the global conversation to shape the future development agenda by participating in an innovative initiative known as MY World, Olav Kjørven, Assistant Secretary General and Director of the Bureau for Development Policy at the United Nations Development Programme (UNDP), said today at a Headquarters press conference.

“There’s been something really important missing in the way we at the United Nations and at the global level have been deliberating and deciding on issues over the last decade, and that something has been you — people all over the world,” he told correspondents, adding that the era of making decisions about global issues behind closed doors with little citizen involvement was coming to an end.

Whoah! No more decisions about “global issues” being made behind closed doors?! Has anyone sent this memo to the powers that be at the Intergovernmental Panel on Climate Change (IPCC)?! But I digress … this non-official record continues:

[Head of Growth at the Poverty and Inequality Programme at the Overseas Development Institute’s Claire] Melamed said MY World allowed people’s voices to be heard as they chose, in an interactive way, those issues that would make the most difference in their lives. Global citizens were being asked to vote on the six most important issues from a list of 16 options put together with the help of non-governmental organizations, United Nations agencies and a range of citizen opinion polls.

“We are collecting an incredibly rich source of information about what people want,” she said. “We’re able to look at what men want, what women want, what people of different ages want, how the choices people are making vary in all kinds of different ways. We can look at particularly what some of the poorest people think and compare that with richer people in their own countries.”

According to MY World’s website, votes can be submitted online, and in some countries, by mobile phone or through offline ballots. Ms. Melamed added that organizers of the survey were also going out in a traditional way, on bikes and on foot, in certain remote areas, gathering information from people who do not have access to the Internet or mobile phones.

As examples of civil society partnership, [Corinne Woods, Director of the United Nations Millennium Campaign] noted that boy scouts had been mobilized in several countries to spread the message and get people to connect and vote. In Nigeria, the Government was supporting many thousands in the national youth core as they visited villages to mobilize votes. Mass media companies such as Viacom, MTV, Nickelodeon, and BET were involved in a major online mobilization.

The text appended to Ban’s March 12 photo-op reinforced my initial impression of an “opportunity missed”:

Results from the survey will be shared with Mr. Ban, his High-level Panel on the Post-2015 Development Agenda, and world leaders.

Yesterday, Mr. Ban met with four youth volunteers who are capturing communities’ development priorities and called on the public to make a difference on the issues that impact their lives the most.

These inputs, along with those from across the UN system and beyond, including the outcomes of consultations going on worldwide and the voices of businesses, academia and the scientific community, will feed into the work of the Panel, which will present its report in May.

“Our goal must be a single, coherent global agenda that can be every bit as successful in inspiring and mobilizing people as the MDGs have been,” Mr. Ban noted in remarks today […]

So we know that The Report of the High-Level Panel of Eminent Persons on the Post-2015 Development Agenda was presented with much fanfare at the end of May; but I thought it would be interesting to see what the results of this “innovative initiative” might have been!

Much to my surprise, I found that voting is still open to all until 2015! From the Methodology page:

When and where will this all happen?

From now until 2015, we want as many people in as many countries as possible to be involved: citizens of all ages, genders and backgrounds, particularly the world’s poor and marginalized communities.

MY World will be available from early December 2012, so countries hosting national consultations can take it into account. However, the global launch of MY World is scheduled for late January 2013 (at that time a comprehensive communication toolkit will be available for all).

This page also lists the sixteen choices (from which a voter may select only 6), of which two in succession were quite interesting:

If you decide to vote, you’ll see that each of the choices has an explanation. There is good news and bad news on the “Reliable energy at home” front. They’re not talking “renewable”, but:

This means that all family members should have reliable and affordable electricity or other sources of energy at home for lighting, heating and cooking. More of that energy should be sustainably generated

but they slipped in “sustainable” (without defining it!) … And here’s the (somewhat predictable) explanation they provide for “Action taken on climate change”:

This means that governments should take on binding commitments to reduce carbon emissions to levels which can keep the global temperature rise below 2 degrees, and invest in adaptation measures particularly involving vulnerable communities

Here’s a screen-capture of the results after I voted: 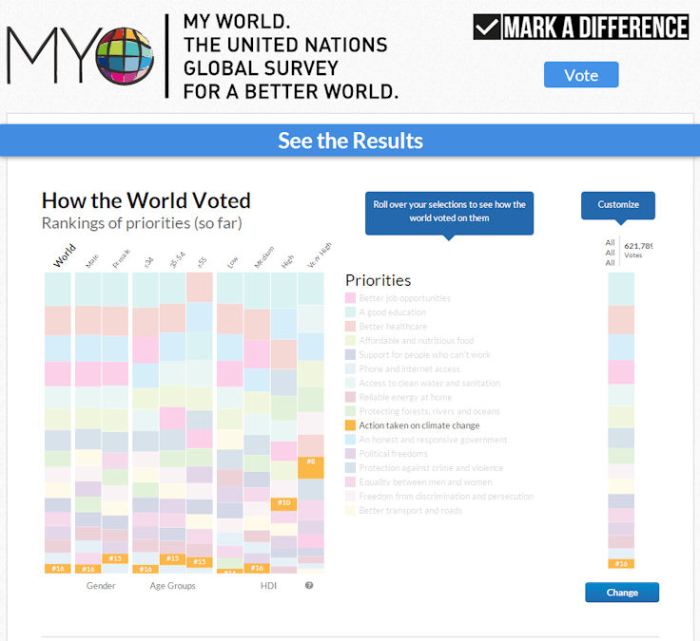 * Note: Customizing the results is a little fiddly – I had to select All a few times before the numbers changed from those for an apparently randomly selected specific country; and I’m fairly certain that the Total was actually 700K+ before I voted (as opposed to the 621K+ after I voted. Minor detail :-)

But in playing around with their interactive platform, I did notice that “A good education” consistently ranked in first place, followed by equally sensible choices. And “Action taken on climate change”, of course, for most parameters was 16th (or 15th).

Cast your votes and spread the word, folks; so that we can keep “Action taken on climate change” where it belongs: off the table (or at least at the bottom of the priority heap)!

It seems that U.K. Prime Minister, David Cameron (who was one of the three Co-chairs of the High Level Panel of Eminent Persons) may well have seen the writing on the virtual wall!

Cameron is the President of the June 17-18 G8 Summit; and his agenda includes no mention of “climate change” [H/T The GWPF]. OTOH, this may be a spoonful of sugar to help some bitter “global” taxing and reporting medicine go down:

PM David Cameron is determined to achieve change issues which are critical for growth, prosperity and economic development across the world.

In an article for the Wall Street Journal, David Cameron explains that the UK G8 Presidency will focus on achieving action on tax, trade and transparency:

Britain and America have a proud history of working together to meet the great challenges of the day. Ours is a partnership without parallel, rooted in our values of freedom and enterprise – advancing not just Britain’s and America’s interests but the good of people around the world.

Today, our greatest challenge is to restore strong and sustainable growth to the world economy.

When times are tough, some want to put the barriers up, to look inwards, and to protect themselves from the world. But Britain and America stand for a better way. We have a precious opportunity to transform the global economy—not by less openness and less free trade, but by more. And we must do everything possible to seize it.
[…] (emphasis added -hro)

Do read the whole thing but in the meantime, here are some word-counts to consider:

And don’t forget to vote so that we can keep “action on climate change” where it belongs:-)