Not too long ago, during the rather fruitless search for something or other in the ever-growing maze of the United Nations, I had stumbled across the Dag Hammarskjöld Library where one can (at least according to today’s tagline) “Explore the World’s Organization”.

During the course of retracing our path through this maze, today, my mouse and I stumbled across the following amazing discovery: 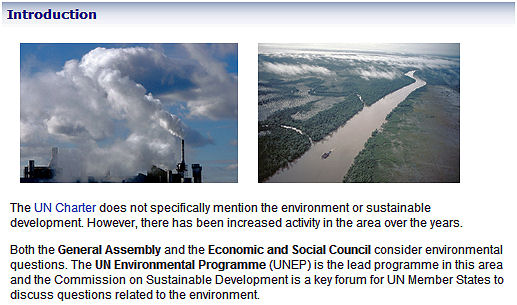 Forgive me for repeating what must be the most shocking understatement of the year:

The UN Charter does not specifically mention the environment or sustainable development. However, there has been increased activity in the area over the years.

As I had noted previously, this blurb seems to be a little out of date, because the so-called:

i.e. the Commission on Sustainable Development, fondly known as the CSD for short, is in the process of being supplanted by an old/new, improved body, as I had first noted (in Feb. 2013):

The delegates will be making a small but significant piece of history by attending the first ever meeting of the UNEP Governing Council/Global Ministerial Environment Forum (GC/GMEF) under universal membership as a result of the Rio+20 Summit held last year.

As well as charting a course for a strengthened UNEP that will help transform a wide body of science into concrete policy action, the meeting will cover many pressing and emerging issues, including: sustainable consumption and production patterns and the post-2015 Development Agenda, financing options for chemicals and waste, and system-wide coordination on Rio+20 follow-up.

UNEP will launch new reports outlining emerging issues such as the global consequences of rapidly receding ice in the Arctic, […]

The “key” word in the above, in case you are wondering, is “universal“. IOW, the GC/GMEF is the same old body with far more actors and – reading between the lines – considerably more (transformative?!) power!

Quite an astounding accomplishment for a body (i.e. the UNEP and all its tentacles) whose mandate (let alone “powers”) isn’t even mentioned in the UN Charter, don’t you think?!

P.S. If you do decide to take a virtual trip to the Hammarskjöld Library, be sure to take your mouse to the UN Documentation: Environment “Major Conferences and Reports” – where I suspect you will find more than you ever wanted to know about the history of these particular unchartered waters of the UN.

P.P.S. On a somewhat related but more local note, there is little doubt in my mind that BC’s Andrew Weaver‘s recent resurrection of his unearned – and faux – “Nobel status” has been very much emboldened by the new, improved (and unearned) status of the unchartered UNEP.

Andrew Weaver, Green MLA for Oak Bay-Gordon Head, has also complained about the responses [to the proposed Kinder Morgan pipeline -hro] provided by the company to his 500 questions.

He filed a motion with the energy board Thursday asking for full and adequate responses and a revised review timetable to incorporate “new and reasonable” deadlines for information requests and evidence.

“Many of the answers I received are simply unacceptable,” Weaver, a Nobel Prize-winning climate scientist, said in a statement.