So while the United Nations Environment Program (UNEP) is busy reaching out to … wait for it … INTERPOL, the (now former) faux Nobel Laureate Michael Mann has (at least temporarily!) ditched his tree-ring circus in order to criticize the Intergovernmental Panel on Climate Change (IPCC)’s recent release of the first volume of its fifth assessment report (AR5).

Perhaps in a rare moment of introspection, it had dawned on Mann that his decision to team up with Stephan Lewandowsky would do very little to enhance his rapidly declining credibility.

Without mentioning his infamous and discredited “hockey stick”, Mann appears to have skated onto the melting ice sheets –> sea level rise –> catastrophic meme. He criticizes the IPCC for being “overly conservative”. Although, believe it or not, Mann actually gives credit to nature for this (whether intentionally or not!) and asserts that an “ice free Arctic” will occur “within a few decades” (rather than the time-frame predicted by the models). IOW, “it’s happening faster than we thought”, of course!

But, here’s an irony-meter-breaking quote from Mann. After seguing to “fossil fuel emissions” (in a voice-over accompanying a collage of lots of scary pictures), he declares (approx. 3:00 in video below) that this “overly conservative” view on the part of the IPCC is:

… partially due to the culture of science. Scientists tend to be reticent … we don’t like to make strong conclusions that we have to withdraw at some later time …

“Reticent“?! Looks like Mann must have … uh … redefined yet another word:

So, considering that he has not “withdrawn” them, it would seem that the ooops, sorry, “conclusions” arising from Mann’s most notable “creation” [h/t Joelle Gergis], i.e. his hockey stick, must have been spectacularly weak;-)

Notwithstanding his conspicuous … uh … reticence, if not deafening silence, re his hockey stick, Mann then proceeds to blame the “outside pressure of the critics” big oil funded skeptics yada, yada, yada … with a series of pictures (including Heartland’s folly, of course) and – during his invocation of his favourite whine to the effect that “they’re attacking (the credibility of) the scientists” – one that I’ve certainly never seen before (at 3:28): 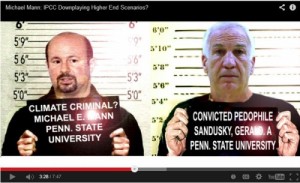 His (predictable!) conclusion, of course, is that we must act now to avert the severe decree of “potentially catastrophic” doom and gloom. So here he is in all his oh-so-modest glory:

The bottom line, of course, is that Mann is (far from reticently and far from subtly) endorsing the “overly conservative” – and “non-policy prescriptive” – view of AR 5’s Working Group I (WGI)’s Co-Chair, the untrustworthy Thomas <We have a choice> Stocker.

In addition to succeeding in “hiding the decline”, as Paul Matthews had noted in a comment (and expanded on in a subsequent post) Stocker left his audience with the following (simplistic, and) “simple key message“:

Does Stocker (or Mann) even mention that the UNEP and INTERPOL have joined forces to convene:

[T]he 1st Environmental Compliance and Enforcement Committee (ECEC) meeting […] which will bring together executive leaders from around the world to design and develop strategies to enhance the effectiveness and efficiency of national and international responses to environmental compliance and enforcement.

Of course not! One can only wonder why they might be so, well, reticent about this particular development, eh?!